Ever had one of those Mondays? You know, the ones where you wish you’d just stayed in bed? I don’t know if it’s the billions of mosquito bites, the splinters I can’t get out of my foot or what, but I am just crabtastic today. Every little thing is getting on my nerves! I need to keep working, but I feel like curling up with my book and just shutting everything else out, know what I mean? So I think I’ll go with my Sam Winchester theme song today. It’s perfect for a crab like me, and it helps me picture Sammy slaying monsters. Win!

This week I’m writing about holidays, greeting cards, video games, college programs and other topics for Q&A sites. What are you up to? 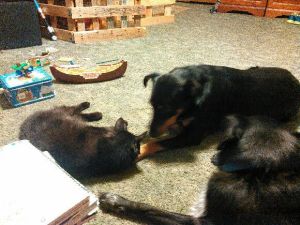 Things I do not love include splinters, thick dog hair that ACTS like splinters in your feet (owww) and walking like Gollum as a result.

Things I DO love on this otherwise fine Thursday include…

-Freebies from family and friends! Between the makeup, doggie goodies and clothes for Wood Sprite, it could be Christmas.

-Animals cuddling and getting along (see above)

-Iced tea so cold it could preserve a large mammal

–Monstrous Affections, a wonderful collection of stories I’m reading. I love speculative fiction, horror, fantasy and sci-fi. This collection has a bit of everything and even manages to provide the reader with surprises, which are my favorite things to read!

How about you? What are you loving this week?

I just love Dianne Sylvan (her writing, her art, her stickers, body image stuff… all of it!) and today I saw that she posted a new Tuesday Currents post. I totally forgot about these and thought it would be fun to join in. Since I’m mostly ghostwriting now, I don’t have a lot of work to link to anymore, and it’s always nice to share something new on the blog. Feel free to join in by posting your answers below or on your blog.

Rocking to… “Rhiannon” by Stevie Nicks, because of course I am

Reading… The Darkest Part of the Forest by Holly Black

Tweeting… So WHEN are we gonna change it, America? So much death by our own hands is NOT normal. And it doesn’t have to happen.

Wanting… A clean house and some chocolate

Today’s song reflects my state of mind lately. I’m coming out of a fog (perhaps because Indy was finally off for one day?) and rekindling my passion for homeschooling, art, music, writing, travel… hell, everything. Gotta warn you that if you haven’t seen Pink Floyd’s “The Wall” video, it’s pretty intense! It scared me as a kid. But it’s also kind of my anthem, especially on days like this.

I’m writing a bunch of Q&A articles this week, about everything from wedding customs to teen magazines. Fun stuff, actually! I hope you have a week full of passion and imagination, readers and writers.

For the first time in I don’t know how many weeks, I had a night of nightmare-less sleep! After nights of having my head sewn onto a new body, seeing a bat eat a baby and so many other pretty traumatic, vivid horrors, I am incredibly grateful for a dream about hanging out in the living room with my family and dogs. While reading about The Babysitters Club… I’ll take it!

In addition to a nightmare-less sleep, this week I am loving…

Indy’s 12-hour shifts. As much as I hate not being with him, I’ve decided to embrace them for what they do for our family. I still miss him like crazy. And go stir-crazy…

Help from loving family members. We got some much-needed work on the driveway done last week! We still have a long way to go, but it was because of one person’s generosity that we were able to get that done.

Awesome books. I just read My True Love Gave to Me, a compilation of holiday romance stories for teens. Some had supernatural creatures and yes, those were the best of the lot, but most of them were good anyway. I just love a quality collection of short stories. I picked it up because Holly Black and Laini Taylor had stories in it, and I discovered a few new authors that I like in the process. I was having a pretty rough week filled with overwhelm when I realized (for the thousandth time; is there an English word for when you remember something you’ve already learned over and over again?) that when I don’t create or read or listen to music–when I don’t immerse myself in the art, the Something Bigger Than (than dusting, than cleaning up dog vomit, than teaching math, than writing product descriptions…), I am pretty stinking depressed. You’d think I’d make time to nourish my artist a little more, knowing that a little time spent on it yields so much benefit.

Unexpected checks in the mail! Those are always fun to receive.

Birthdays for babies! A friend of mine invited us to her one-year-old’s birthday party next weekend. I am looking forward to baby-face-in-the-cake, which is, of course, the point of one-year-old birthday parties.

Bunnies. Sigh. I just love the babies we have, even though we have to find them homes. One already has a home, and although I am so happy that it’s with good people we know, I still miss him.

Our kitty, Cleo! The family who took Little Brother bunny (now named Bambino, which is adorable) gave us Cleo in exchange. I’ve always wanted a tortoiseshell cat and couldn’t pass her up, and I just LOVE her. She’s the prettiest kitten I’ve ever had and she is such a little mess. We named her Cleopatra because she walked in like she owned the place right off the bat. She even puts our 50-pound dogs in their place.

Lemonade. Sigh. It’s my favorite thing about summer. And fresh fruit! I’ve only had one lemonade this June, but I hope to make some homemade next week!

Hellboy. And Indy loves him, too, which is why I’m making him a giant Hand of Doom for Father’s Day. Shhh! Don’t tell. But I’m struggling with it a bit. So he may not get it until August… He already has some cool stuff for the big day (a new knife, a movie he wanted and a surprise race at the Rusty Wallace track!) so if I’m late I won’t feel too guilty. I hope.

New clothes! Indy picked me up some t-shirts because I only had two for summer. In the Midwest, that is a recipe for constant crankiness in the summertime. One is green with Yoda on it and it says, “Size matters not.” The other is an AC/DC shirt. I never get myself cool screen-printed tees like this–I always grab whatever is the cheapest solid color tee–so I’m pretty stoked about them. I also cut some pants into shorts, which is BRAVE for me, since I haven’t worn shorts around since having my daughter. Holy cow, is it so much more comfortable. It’s amazing how miserable we let ourselves get just because we are self-conscious about something.

What are you loving this week?

I was avoiding Monday morning like the plague, yet here it is, all up in my face. What the hell, Monday? Respect my boundaries.

Today’s song is a new favorite of my daughter’s. She spent part of the weekend listening to my Spotify and fell in love with Wreckless Eric’s “The Whole Wide World.”

This week is already overwhelming me. I’ve got lots of work to get done, 4-H projects to finish up with my daughter (that I may postpone), a sleepover and a playdate, a Father’s Day project to start (let alone finish)… One thing at a time, right?

The only significance to this song is that I love to play it when I’m cleaning or working out, and I am painting a lot this week (walls, cabinets, a fence…), so I thought I’d share:

I’m actually covered in paint at the moment! Indy is working 12-hour days again (boooo) but we just had a wonderful weekend together. The three of us went to the Magic House, swimming, the Fountain on Locust, shopping, walking… It felt so normal to just be together instead of rushing before he has to go to work or only seeing him one hour a day, like we will this week. These long weeks are tough on us all. Also, I braved a giant water slide and totally forgot to hold my breath before plunging in the water…

What are you up to this week, readers and writers? I’ve got some top 10 lists I’m working on (my favorites!), some ghostwriting and a bit more planting to do. Wishing you a marvelous week!

The purpose of this blog is to chronicle much of the work I do as a freelance writer and author, mostly for personal use. Feel free to look around and drop me a line!

Looking for my alter ego? You can find Sara Jay's supernatural romance here. (Adults only!)

The Magician's Elephant
by Kate DiCamillo

The Hunger Games
by Suzanne Collins

The Giver
by Lois Lowry

Share book reviews and ratings with Sara, and even join a book club on Goodreads.

A Year of Feminist Classics